Have you ever wondered how fast a connection can be between computers in your home network? I tried it out for you.

Current devices will be able to provide you with Gigabit LAN connection speed. Current standard speed is 1 Gbps.

1 Gbps means one gigabit per second. Since one byte contains 8 bit, this translates to 125 Megabytes per second.

You can see the connection speed here: 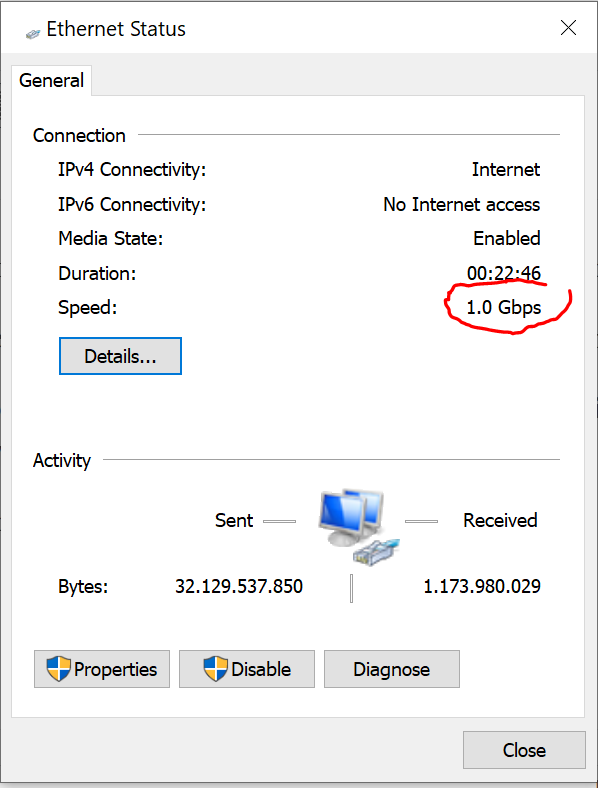 Speed is determined by the slowest component of

The status tells us the speed of our connection:

But what does this translate to in real life speed?

Is this really all? Is something broken?

No, this is the correct speed you will get at very good conditions. How come?

A real life speed could be

This is a value you can see in task manager under networking. It is 6% lower than the nominal 1 Gbps which would be 1.000 Mbps. Real life speed is simply not the theoretical maximum. So we have 940 Megabit per second. One byte contains 8 bit. The same transfer speed can be expressed as Megabyte per second, instead of Megabit per second. 940/8 =

This is 117,5 MegaBYTES per second which can be transferred. Then again, there is another small reduction. The overall traffic includes both “Payload” traffic and “Overhead” traffic. Let’s say 4,7% of transferred data is “Overhead” and will not lead to the actual data being transferred. So of these 117,5 MB/s, the “Payload” data transfer speed will only be 95,3%. 117,5*0,953 =

This value is the one we have seen before. It is a very reasonable real-life transfer speed of a single large file over a local ethernet connection with cables. As we can see, this is 11,4% lower than the theoretical, nominal transfer speed.

When transferring many small files, speed will be very different, and a lot lower. This is due to the fact that each file needs to be announced, transferred, placed, checked and reported back as successfully transferred. This causes a lot of overhad traffic which may well be larger than the payload traffic. For transfer purposes, it may be sensible to pack large amounts of small files into a single ZIP file and transfer that. Then this file can be unzipped at the target location and could be there a lot sooner than the individual transfer of small files.

Hope this is helpful to someone. Or maybe to myself in the future.