Summary statement: Covid-19 in China is under control. Outside China, the infection is in a beginning state and expands exponentially. Assumed Fatality Rate for Covid-19: 0.7%.

Data source is the World Health Organisation with their situation reports on the Covid-19 outbreak 2019/2020 as well as the Wikipedia entry on the Coronavirus outbreak.

Worldwide Development of Infections and Fatalities

Dates on the x-Axis are report dates of Situation reports by the World Health Organisation (WHO Sitreps), compiling the worldwide reports of the preceding 24 hours. The graph caption contains the date of the latest WHO Sitrep which was used to update the data. WHO Sitreps are published every evening.

As China has been successful in controlling the outbreak, the following discussion will focus on the development outside China. 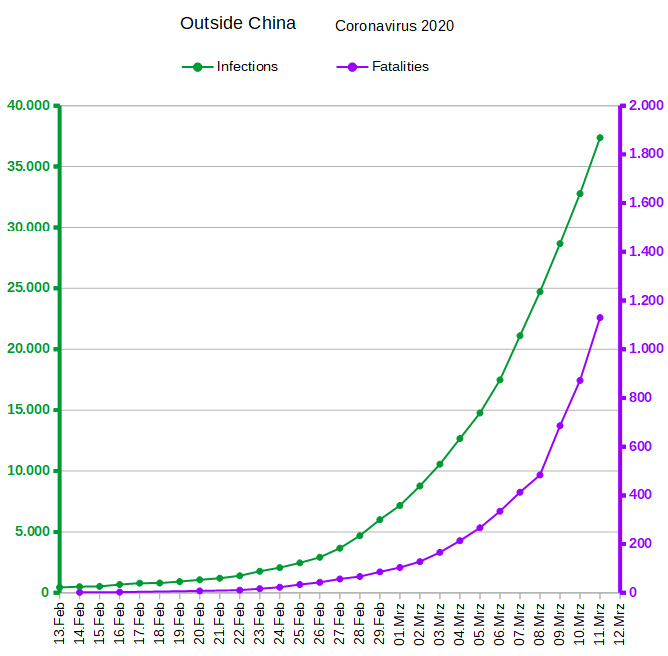 Putting both data sets on a logarithmic scale will show whether the development is exponential or not. 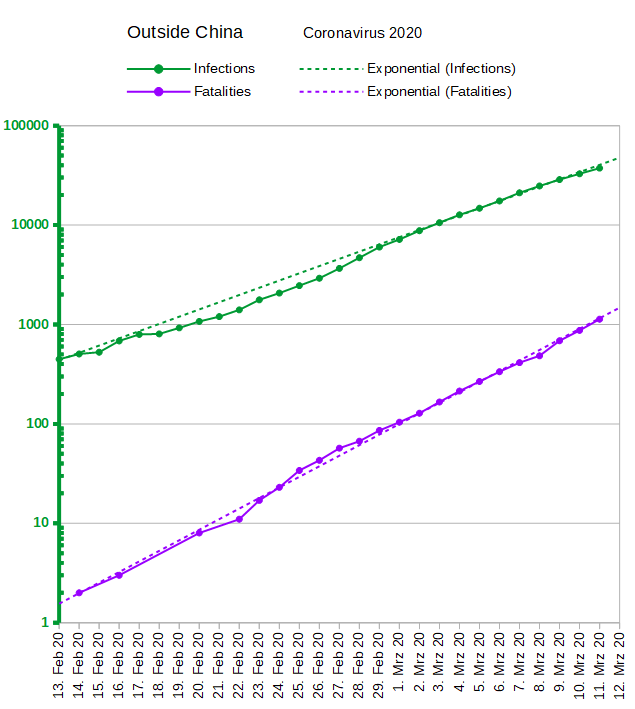 An exponential development would show as a straight line on this semi log plot. The available data is very close to the exponential trendline which was added to the graph. With a little optimism, a hint of slowdown can be interpreted into the infection curver over the past week.

To put this in relation to the development in China, while there are still more infections inside China than outside, this may well be reversed in the near future. 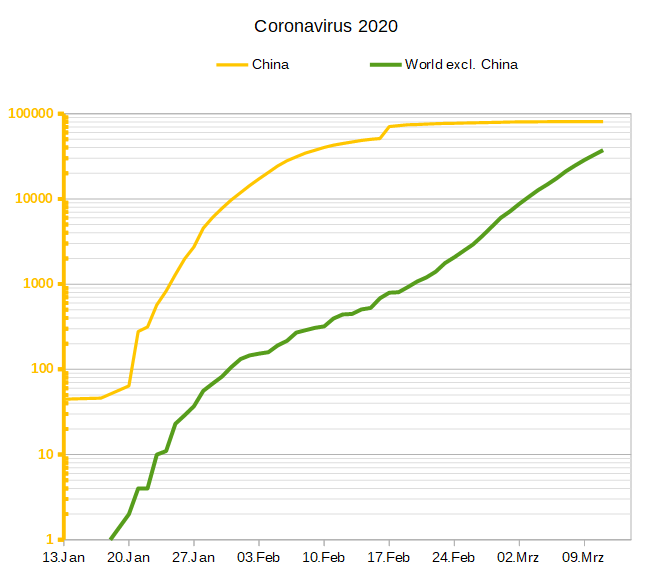 Conclusion: At this point in time, Covid-19 virus spreads and kills exponentially outside China.

This sounds drastic, and it corresponds to the data, however I would like to add the notion that this virus is not overly deadly.

I would assume approximately 0.7% as a fatality rate for Covid-19.

This number is an educated guess. It is based on the fatality rate found in South Korea and in Chinese regions away from Wuhan. The assumption is that on average, out of 7 infected cases, only 1 will ever make it into the statistics, because the other 6 have no symptoms and are not considered at risk, or they have symptoms and refuse to get tested, or tests kits are not available. In either case, they will never be registered as an infected person. Yet they develop the antibodies.

The final value will likely be between these two values.

South Korea is the first country to excessively test people for the virus. They still didn’t test everybody, but apparently they tested a lot of people. As per the WHO sitrep of 14.03.2020, they report 8,086 infections and 72 deaths, showing a fatality rate of 0.89%. China in areas away from Wuhan found 0.7% fatality rate. Wuhan itself had a shortage of test kits and showed a higher fatality rate – probably because they were unable to capture all infections. Italy shows a huge fatality rate, but an Italian counts as infected when a certain institution in Rome certifies that, and they are overworked. So they are unable to capture the true infection rate. Iran shows a huge fatality rate, but their culture and health system may also have a tendency to not capture all infections. The US show a high fatality rate. But in the US, the citizen had to pay for the test (at least until 13.03.2020), and not everybody has insurance. So people didn’t get tested. Therefore, a high mortality rate likely suggests an underreporting of actual infections.

Let’s look at the calculation:

This formula shows the case fatality rate after the infection is over, giving a representation of the fatality rate for cases where the result is known.

While the epidemy is in progress, this value could still be distorted, if there are is a systematic difference in the time it takes to reach either recovery or death. This seems to be the case for Covid-19: Apparenly it takes longer to officially clear a person as no longer infected, than it takes for the fatal cases to lead to death. This would explain why the Concluded Case Fatality Rate declined continuously over the past week from 7% to below 6%.

This formula shows which fraction of infected people have died from the disease, as a snapshot at the moment of reporting. It implies all acutely infected cases as survivors, which is not likely. This values does not give any indication of the fatality rate for the moment of ending the infection, or “survivability”. While the epidemy is in progress, this number is distorted by definition, as all cases with unknown outcome are part of the calculation. The fraction of acute infections is proportional to the uncertainty of the Snapshot Fatality Rate.

All of these reports make use of a “Snapshot Fatality Rate”. In order to establish the likelihood of infected persons to reach death at the end of the infection, fatality numbers must be sampled among those which are no longer acutely infected, because they were cured or they died (Concluded Case Fatality Rate). This has not been performed in above mentioned studies. Given  that all studies were performed at a fairly early stage of the epidemic, with large portions of subjects still acutely infected (up to 93,6%), the “Snapshot Fatality Rate” was very low, and very uncertain.

The Concluded Case Fatality Rate provides an indication about the likelihood of an individual to die from the infection (or so survive it, positively spoken, looking at the inverse value). A Snapshot Fatality Rate has no such meaning for the individual. A practical advantage of the latter value is that it is smaller while the pandemic spreads, and therefore useful in media reporting in order to avoid panic.

Last but not least, all calculations performed here are based on confirmed infections. Because the majority of infections only has very light symptoms, we can assume that particularly light infections will never be reported. Not everybody consults a doctor for a cough. However deaths will always be reported – in the worst case they are attributed to the wrong cause. If there were actually 7 times more cases than the reported ones, of course the death rate based on the overall number of reported and unreported cases would be only 14% of all values which can be derived from reported figures.

For global virus spread figures, mostly driven by the development in China, we have seen the first roughly 100 fatalities on an exponential path. After that, development became rather linear, and it is not contained yet. Let´s hope that the trend outside China will also be controlled and eventually contained.

The infection rate will necessarily decline eventually, at the latest when the virus runs out of uninfected hosts. As a theoretical exercise, I have extrapolated the curves into the future, assuming both infection and fatality will spread exponentially. These are very pessimistic assumptions. As I mentioned, this is a purely theoretical exercise. 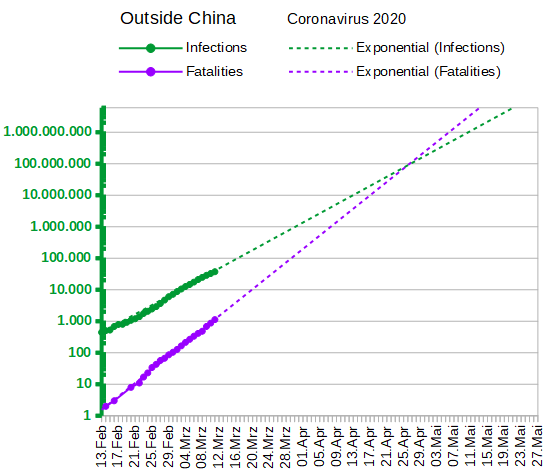 Putting the curves on the same scale, it becomes obvious that the current rate of fatalities grows at a faster pace than the rate of infection. At a strictly unmitigated exponential rate, the entire world’s population outside China would be infected by mid/end May 2020. However fatalities would exceed infections in the beginning of April, which is impossible. So this extrapolation is clearly unrealistic.

How bad is the corona virus? How does corona compare to other infections?